For a long time, the Heroku Postgres team had a problem with something we called “the follower hole”. When you promoted a replica/hot standby database (called a “follower” in Heroku Postgres), or when you created a new PITR2 database (use the Heroku Postgres fork/rollback feature), you had to wait until a new base backup was created on the new leader to create any new replica databases that replicate the new leader . The base backup is a binary copy of the database cluster files. It takes however long the file system itself takes to read (and copy) these files, in our case to S3, to take a new base backup. When competing with large or CPU/IO intensive databases, this base backup capture could take a very long time (multiple hours, or more than a day in some cases we’ve seen).

Example of the follower hole 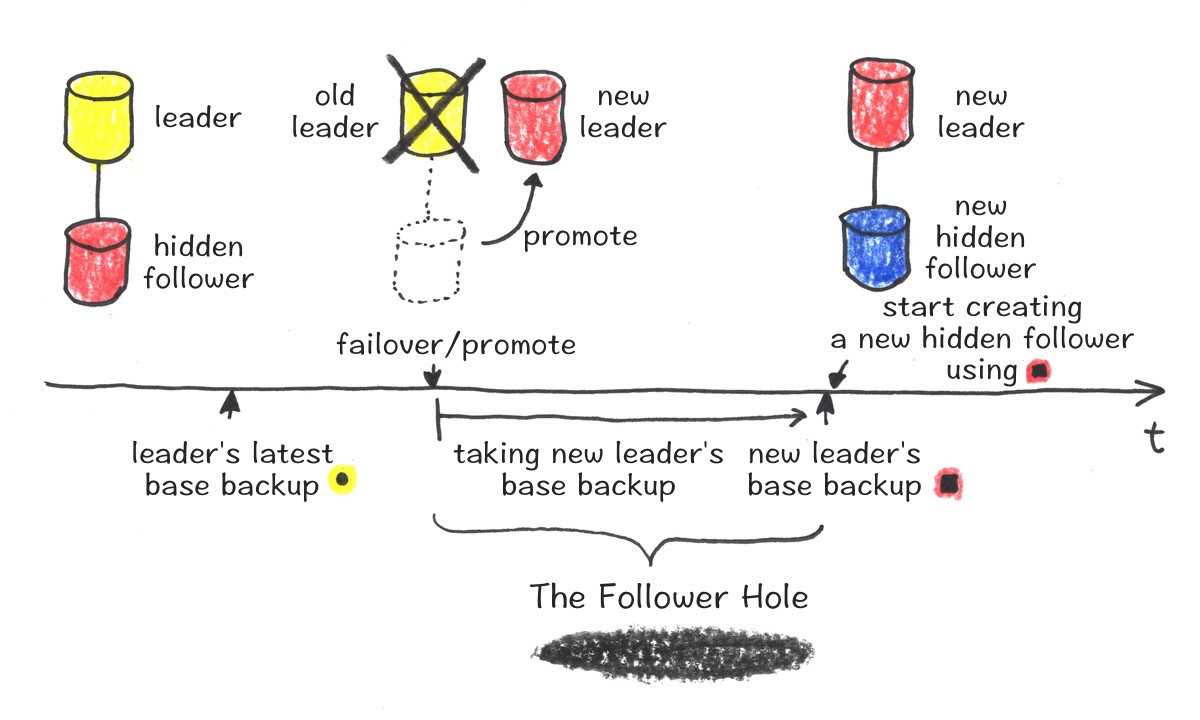 This was a particularly big issue for customers who wanted to create new followers immediately after promotion. This promotion method is also used with Heroku Postgres plan upgrade, and we were often asked why they weren’t able to create a follower with the new database, or how long it’d take until they’re able to create one.

Follower repointing: we had the same issue with the HA failover that was performed by us. With customers who had (normal) followers with the HA leader, after the failover, we were recreating these followers with a new leader automatically. However, until the base backup is done, customers had to keep using the old, not up-to-date followers (because it is not following the new leader).

This was actually solved by “follower repointing”, which is another huge improvement that we made recently. With follower repointing, we repoint all followers to the new leader after the failover/promotion and continue the replication.

The follower hole was closed by taking advantage of any base backups that are available in all ancestry timelines, from various places in S3. Postgres creates a new timeline whenever an archive recovery (WAL replay) completes so that it can identify the series of WAL records before/after the recovery completion and avoid overwriting WAL files to other timelines. An archive recovery completion here means actions like promoting a hidden-follower or finish the replication (unfollowing). Upon this new timeline creation, a history file is created to record which timeline it branched off from and when. 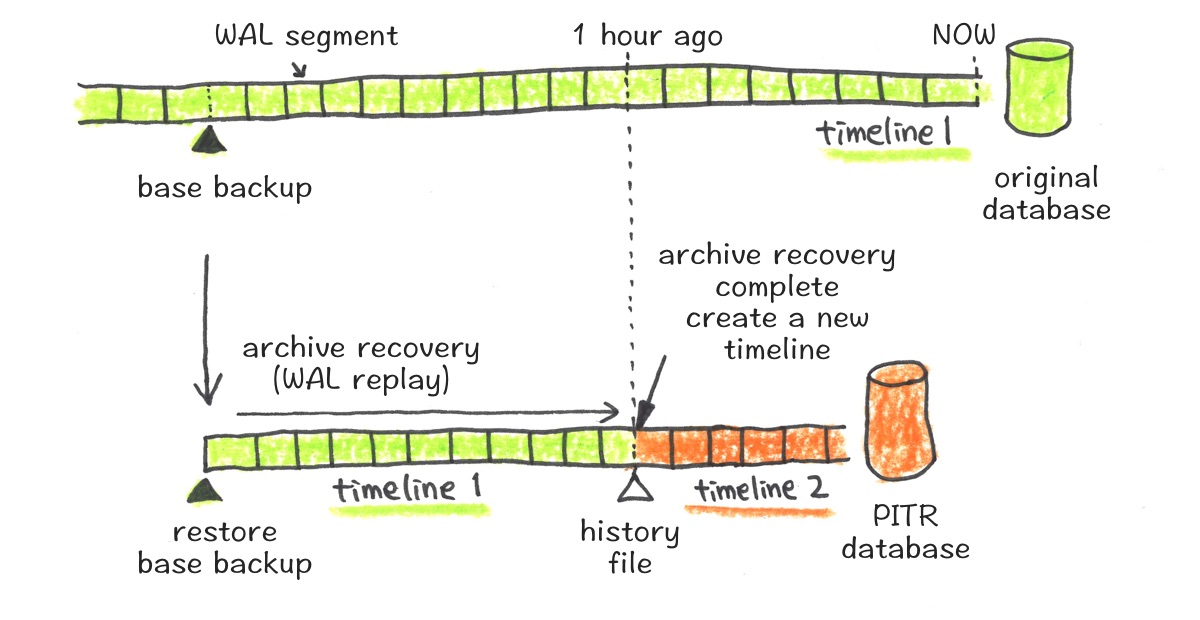 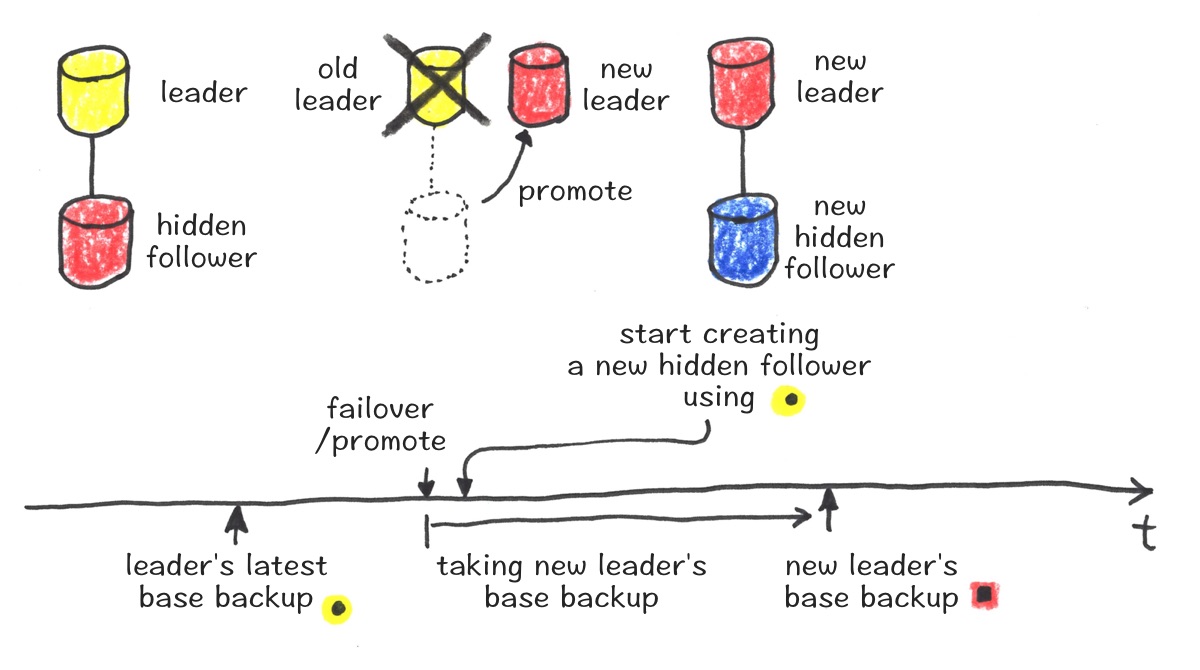 Let’s go back to the same example of the follower hole explanation. To create a new hidden-follower (blue), the new leader’s base backup (red square) was used previously. Now, the old leader’s base backup in the previous timeline (yellow circle) is used and the new hidden-follower recreation happens right away after the promote. Then, the new hidden-follower keeps replaying the WAL of the old leader in the previous timeline first, and at any point when the promote happened and a new timeline was created, it switches the timeline of replication to the current timeline and keeps replaying to be up-to-date of a new leader.

Encounter with a phantom WAL segment

While we were working on closing the follower hole, my colleague Greg Burek found out that there was a certain case that Postgres crashes while replaying WAL. This happened with databases created using the old leader’s base backup, where the base backup was taken during the previous timeline. The error message was something like the following: 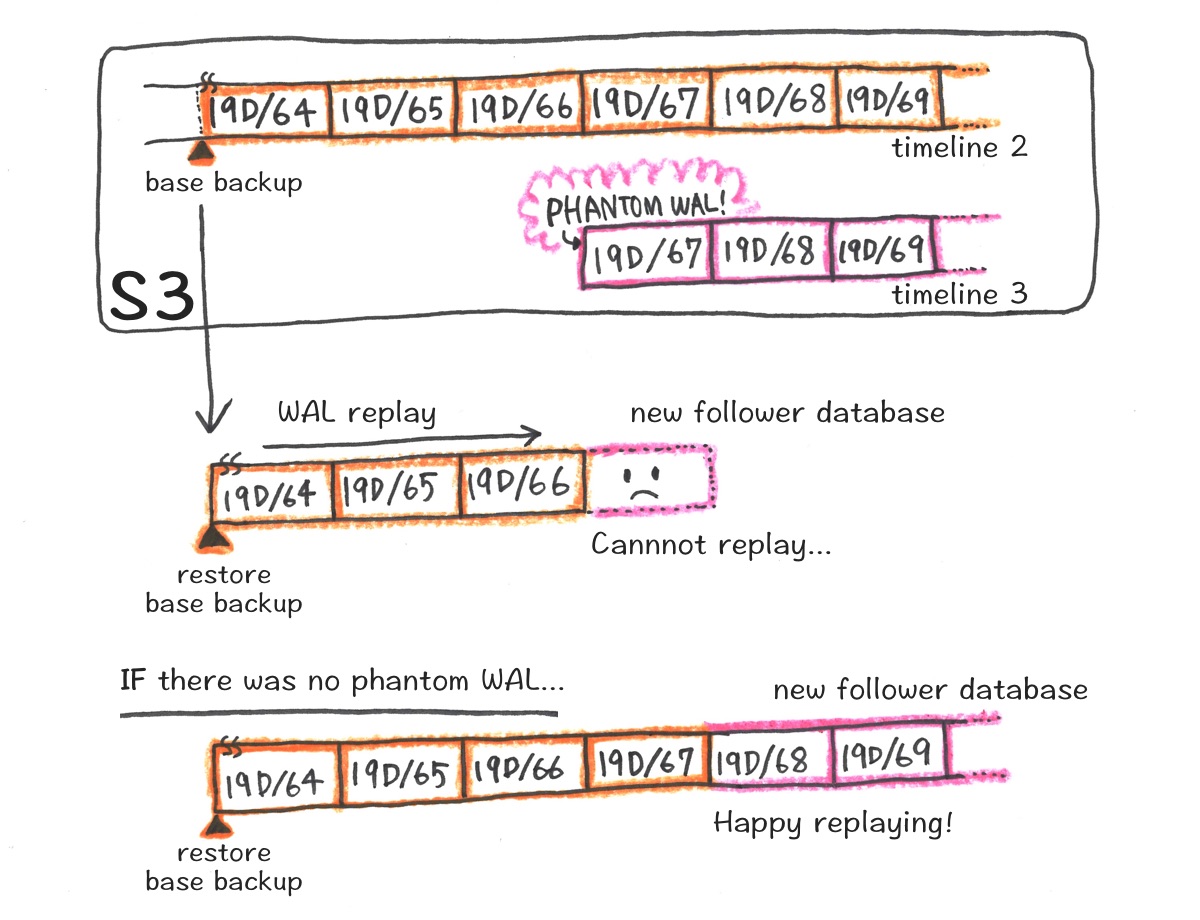 Here is how creating a follower works in Heroku Postgres.

When the follower is created using the base backup of the leader of its current leader (timeline 2’s base backup), it gets complicated. The base backup restore part is simple, and replaying the WALs of timeline 2 (orange) is also simple. However, when there are two WAL segments with the same log + segment name combination with different timelines (timeline 2’s 19D/67 and timeline 3’s 19D/67), some rules are needed for which WAL to replay and Postgres respects the biggest timeline number’s WAL every time. While we wanted Postgres to use the timeline 2’s WAL file which should be the “correct one”, it used timeline 3’s WAL file (the phantom WAL file) because it respects the biggest timeline number, and Postgres process exited because it wasn’t able to replay such WAL.

You can find some implementation around here in this Postgres code. Why Postgres is trying to replay the timeline 3’s WAL segment even though 19D/67 doesn’t really belong to timeline 3 according to the history file? That is a good question, which is discussed in the bug report here as well.

Where did it come from?

The phantom WAL segment can be created if the database is promoted at a WAL segment boundary, just after an XLOG_SWITCH record. This means that there is nothing written in a current WAL segment yet, at the time of promotion. This can happen especially when your database is very quiet.

This phantom WAL segment is not an immediate problem, as it’s not a proper WAL segment and it’s not visible to the WAL archiver process. Unless the phantom segment is archived, it won’t be replayed anywhere. However, after a while, in a later checkpoint, Postgres will eventually try to remove this WAL segment file. With Postgres WAL archiving, you can specify the minimum number of past log file segments kept in the pg_xlog directory4 with wal_keep_segments setting. Postgres will try to remove (or “recycle”, by calling rename()) any old files if it’s past wal_keep_segments and can be removed safely (e.g. will not be needed for crash recovery). During this process, Postgres wrongly assumes that the phantom WAL segment is needed to be archived – “Oops, seems like we failed to let it be visible to the archiver process. Let’s archive it!”.

Let me use an actual WAL file name to explain. In the case that I picked up above, 000000030000019D00000067 was the phantom WAL segment file name. The promotion happened after timeline 2 archived 19D/67 and there was nothing written in 19D/68. Then, the timeline 3 started with 19D/68 but also created a phantom WAL at that time as 19D/67. This 19D/67 (with timeline 3) wasn’t archived immediately. Heroku Postgres’ wal_keep_segments setting is 61, so somewhere around 61st segments creation after the promotion, Postgres will try to “remove” 000000030000019D00000067. This time, instead of just removing it, Postgres actually marks it as ready to be archived. During our investigation, we observed this phantom WAL creation always happened 60-70 mins or so after promotion. This is interesting but makes sense, because our wal_keep_segments setting is 61, and we also have archive_timeout as 1 min, which means it generates a WAL segment at least once a min for a very quiet database (and we’ve been testing with a quiet database).

The patch in Postgres now does not create a phantom WAL segment, even when the promotion was at a WAL segment boundary.

Solution to the phantom WAL segment

Actually generating a phantom WAL segment should be relatively rare in practice as it requires an idle database with no writes being performed at the timing of a new timeline creation. Attempting to replay such phantom WAL segment is also rare because a newly created follower database needs to use an ancestor’s timeline’s base backup. However, we manage so many databases, we had to do something about it. Our workaround for databases running Postgres versions prior to the patch, is to run a task to look for the phantom WAL segment after the unfollow/promote action, and rename the segment once it’s detected in S3 (we use wal-e for continuous archiving, and we use S3 for the storage). A renamed WAL segment file won’t be considered as a WAL segment, so it won’t be replayed.

In two months, it has saved at least six databases from getting bitten by a phantom WAL segment. This is not a large number compared to how many databases we manage, but it also means there were six fewer pages (otherwise each one would have paged), and six fewer unhappy customers. I’m happy that we have this workaround in place.

I was actually trying to explain why a phantom WAL was generated more, but it’s getting long so I’m going to skip in this article. If you’re interested in, please read Andres email and commit logs:

This slide is good to get the idea of Postgres timeline:

Special thanks to reviewers, Peter Geoghegan and Greg Burek. Also thanks for the awesome title calligraphy, Idan Gazit.